I’ve recently re-read a little book ‘Who moved my cheese?’; let me share a morsel or two from it….. 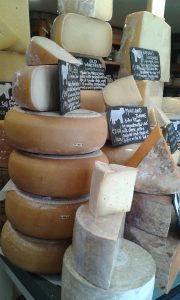 It’s a parable – a story that relates and brings meaning to another part of life. Jesus was a good story teller who used parables to good effect, such as the Lost Coin or the Prodigal Son.

‘Who Moved My Cheese’ is about four characters who live in a maze and daily look for cheese to nourish them. The characters are Sniff and Scurry two mice-like creatures who sniff out change early and scurry into action; and Hem and Haw, little people, who deny and resist change. The story follows Haw and the lessons he learns when he comes to terms with the fact that the cheese is gone and action is required. ‘Who Moved My Cheese’ is ultimately about change and how different people react to or embrace change.

I’m not going to summarise the entire story, but rather pick out the lessons that resonated with me. If you want to know the whole story buy the book*; it is worth the money and the time (about an hour) it takes to read it!

What’s this story got to do with coaching?

Haw learned to take things from his past that would help him embark on the journey to reach his goal.  A coach would help you realise and tap into your strengths and successes. Generally, people working with a coach achieve their ambitions quicker and more efficiently than if they were ‘going it alone’.

Another powerful role the coach would fulfil is as a cheerleader, the one to encourage along the way and help the celebrations of success. Haw often thought of his friend Hem, his journey often felt like a lonesome journey, with a coach there is always company on the journey!

Do consider letting me be your coach! Coaching can make all the difference! I love helping people or groups move from where they are now to where they want to be.  Take a look at the testimonials on here and see what other people have found.

Photo taken at and used with the permission of The Courtyard Dairy, Settle North Yorkshire. A wonderful place for cheese lovers!